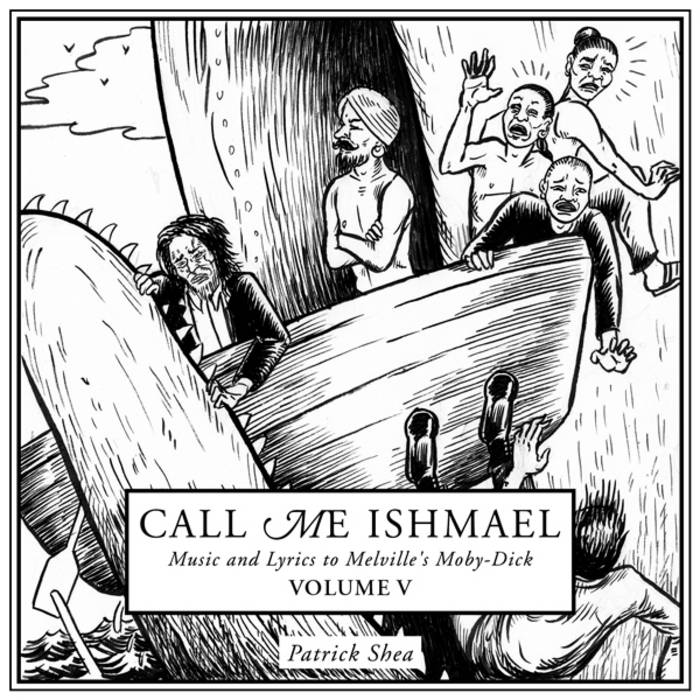 The more the merrier!
Came out of the heat, and they're pulling beside.
There's noting scarier
Than losing a whale while you pray to the sky.

Those devils are good fellows, too!
You see them row, and the rowing's proof!

Break your back on it!
An angry dog with a knife his teeth,
But don't belabor it --
You're nodding off, like a day at the beach.

Now, hail ye, Starbuck, pull aside,
Have you seen such sights in the whole world wide?

Oh, the whales abound and the action's nigh!
With duty, our profits will rise and rise!

Look thee out at the deep, dark blue --
The ocean's looking at each of you!

And now, prepare you
To chase your death to the heart of a storm.
With hearts of caribou
We tarry on, and we're never undone!

Now whale and squall and harpoon are one,
With hope aloft in the setting sun.

May Truth reveal itself
In moth-fed predilections,
Furnished by the wealth
Experience conditions,
So we do it!

I can't conceive your eyes,
But I don't care.
Maybe another day.

In all, precedes a form --
A wall of indivision,
A cold protecting warm
In palpable commission,
And so we charge ahead.

Behind it all, amassed,
Tremendous life,
Or so I see in you.

A youth who steals the path
From timely revelation,
When sorrow takes it back,
Dies in observation
Of the only Truth.

I can't conceive your eyes,
But I don't care.
Maybe another day.

"Hey now, comrade, something is coming our way!"
"Keep your mind on the task at hand, or be gone!"
In labor we were silenced all along.
"The captain sleeps below us, so be what you be."
In deference, we change the truth that we see.
The ocean's rolling!

In labor we were silenced all along.
In deference, we change the truth that we see.
The ocean's rolling!

Oh, everybody knows you're an Englishman,
Leaning with a beer on the still capstan.
A party in the bow, with beef to pass around --
Oh, you're out of sight!

Extend your generous hospitality --
We're worked to the bone.
Whether it bull-beef or dromedary,
It's more than I've known.
And so we sing it!:

Make me an Englishman,
His life is for me!
Never to lift a hand,
Without some relief!

That's how we sing it!

Oh, everybody knows you're an Englishman,
Dizzy in the head when you're harpoonin' --
You throw it in the dark, but always hit your mark.
Oh, you're out of sight!

Make me an Englishman,
His life is for me!
Never to lift a hand,
Without some relief!

That's how we sing it!

Joy from joy,
And misery from misery!
Sadness suckles at your breast again.

The weight of depth,
Enough to crack your deadened half,
Could never leaven with felicity.

So we're caught,
Contemplative, but for our lot --
Each ambition with decent of pain.

Brace us now,
And live we for the where and how!
With practicality I stand, estranged.

Credit given in forbearance's name;
Nothing given to enjoy the same.

Joy from joy,
And misery from misery!
Snakes and songbirds do beget the same.

Brace us now,
And live we for the where and how!
With practicality I stand.

Purge your pride, in the belly of
Desire, in the valley of
Required opportunity --
Delight in obedience.

The flame burns true as a compass, there's
No skew on perspectives you
Want to simply justify --
And so do you slumber.

But, oh!
The hand of God is up above!
And, oh!
You cannot run from boundless love!

Carried down with a tempest of
Renown, to the stillness of
Each round individual sphere --
Peace now is a punishment.

So beg your Lord for the trying reward
Bestowed for the congress of man,
Each lost in his wickedness --
And so, with your pilot!

And, oh!
The hand of God is up above!
And, oh!
You cannot run from boundless love!

Stand we now, fast to the columns of grandeur,
As a colossus, yeah!
Up in the trees, with the world overflowing --
What more to conquer, hey?

Here do we sway; destitute,
Languorous days; amplitude
Of the humble-most waves
Move us far and wide.

And we, not bemused
For exposed through and through!

Stiff of leg, with nature's reason,
So the minstrel shows betray,
But I'll preach another season
To the sharks who wouldn't listen to be saved!

Um, um, um.
Um, um, um.
Every snowflake in the winter,
Every lightning bolt in spring,
Every gift the Earth is given,
Is given unto me. (Given unto me!)

The sky, undone,
Overthrown,
Daggers flashing off and on.

And I sway,
Dearly clung
To the lightning rod.

Spinning in the storm,
An angel adored me,
Tempted my escape from every claimant,
And we'd take the open sea,
And turn it around.

A token of the war
In every arrangement
Made between a man and that which taints him --
It's a life to overthrow,
May heaven allow.

Tell me, could it be the loss,
The stinging loss
I feel in every dream? In every
Meaning lost to waves in rugged sea?

Here I stand alone,
At opposite corners
From my only duty as I claim it --
Can I take the open sea,
And turn it around?

Tell me, could it be the loss,
The stinging loss
I feel in every dream? In every
Meaning lost to waves in rugged sea?

Cry "hell!" until you're right,
You'll always be right
If you hem and haw wide as Arkansas, you'll probably draw
Inside of a straight.

Give me the law,
Let me be strong,
Give me salvation.

No angel would affright,
The way you affright.
You feed their fear so that you can steer them far and away
From nature's rights.

Give me the law,
Let me be strong,
Give me salvation.

Out over the ocean,
I feel every notion
Of peace, and of suffering.

In every great undulation,
Every soul, every patient
Belief, every broken sleep.

Just as the sea touches rivers
In the valleys, as they quiver
From hearts to humanity,

Each of us touched and delivered
By the shadows and glimmers
Of all time, of all human beings.

Science could never relate
(With a partial view of the animal state)
A true description of whales,
That would speak itself to our animal states,

Neither the stories of old,
Predetermined by man,
Prior to Noah, alone,
Floating over the sand.

Show me Platonian form,
And I'll show you one who has yet to have sworn
Blessings for each of the crew
In the eye of fear, in the mouth of the storm.

Give out an animal wail
In its terrible face;
And draw it, as bravery pales
To indifference.

Fault can only be laid
When a man assumes all experience stale,
Lifeless, and easy to rate,
'Til the distance makes his illusion the same.

Lay out the soul of your soul,
A majestic array,
Tuned to the palpable, flawed
Imbrication of days!

(There she blows!) In every noble heart, an island,
(There she blows!) Dense with every woe a lesser man could feel,
And his island has breeched in the heart of the sea
With the heavens above and a mystery beneath --
Birds aloft in joyous contemplation.

And he raised our boat in rows of ivory teeth,
Then he made a safe retreat.

My illness will suffice,
Torn from the echoes,
To guide this grand device.

Pip:
Fully centered, so here I stay,
The coronation of king-for-a-day,
As I make believe a history to abnegate.

Ahab:
The hour is coming nigh --
Spun off the axis.
Oh, empty paradise!
Let me force the way.

No caprice or guile
Brought yet to sully
A dutiful demise.

Did you know
It's a key regal dignity, oh for sure,
To taste good?
He's a well-seasoned leader, a salty germ!

And all told,
At the grand coronation he's crimped and curled
With some oil,
While a holy significance gives the foil.

Take one, take two, take three,
Take all of it.
We view the rule of kings
As sodomy!

We know what kind of men are you,
Given fully to pompous fools.

So often,
A contemptible signifier for men,
Like or not,
Is the well-oiled nature of every lock.

Safe to say
That a king wouldn't use the same oil as they.
Fancy pants
Needs the oil from the free men who bear the lance.

Take one, take two, take three,
Take all of it.
We view the rule of kings
As sodomy!

Three cheers for the atmosphere,
To good health in the coming years,
To all smells foul, and to the sweet aroma
Born from the wretched, blossomed in the corner.

St. Paul dancing at the ball --
From dishonor to the glory tall.
Wake, baby, wake -- it's only in the water!
Change what you take, and change the holy order!

Wake, baby, wake -- it's only in the water!
Change what you take, and change the holy order!

Come as a revival of our pride;
Chimneys, volcanic, break our lives
Back to the building blocks, inspired
By the mechanics of each grief.

Come think of the beauty in her eyes;
Think on reflections in your child.
Make for the evening, come what may! --
We're better in bitter struggling.